Producing high quality food foams with long shelf-lives is a challenge. Traditional stabilisers of food foams such as proteins are not able to stop disproportionation – the gas transfer between bubbles which is driven by Laplace pressure gradients, and leads destruction of foams. Recently, it has been demonstrated that super-stable foams may be formed using micro-rod particles as stabilisers. We have developed novel, food-grade micro-rods from shellac, ethyl cellulose and zein for the stabilisation of edible foams[1] – see Fig. 1. Such edible polymer microrods from shellac wax and ethyl cellulose which have potential utility in a huge number of foam formulations in the food industry due to their ability to adsorb and fuse together at the gas–liquid interface and provide a high level of steric stability to foam gas bubbles. We show that the diameter and the aspect ratio of the micro-rods can be controlled by varying the shear rate and the polymer concentration of the disperse phase (Fig.2). The morphology of ethyl cellulose micro-rods was changed from flat ribbons through micro-rods to long strings by altering the solvent polarity. This opens a range of possibilities of producing ‘hybrid micro-rods’ by using mixtures of different polymers and other food grade composites. An advantage of this would be to combine the surface active properties of shellac with the reduced adhesion of ethyl cellulose micro-rods. 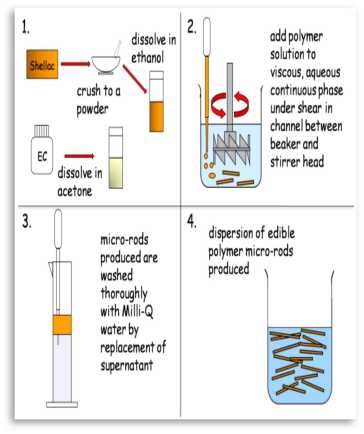 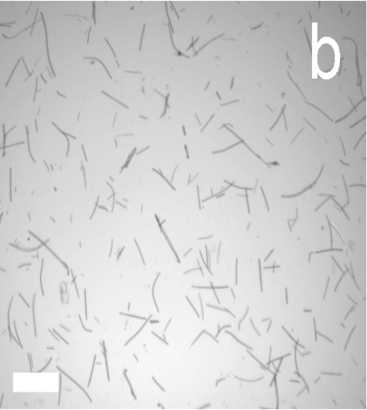 One of the factors in destabilizing foams is the liquid drainage which makes the foam films between the bubbles thinner and eventually leads to their rupture, bubble coalescence and foam collapse [2]. 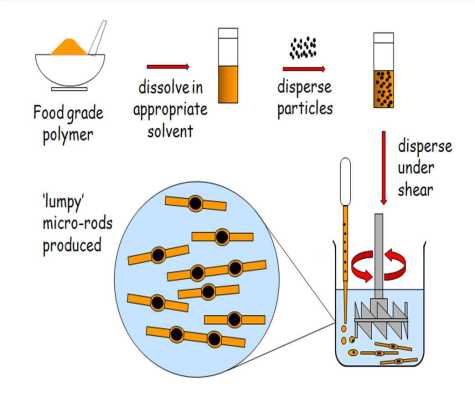 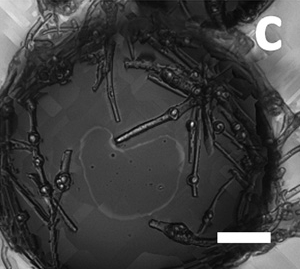 Fig. 3 LHS: Schematic depicting the main processes involved in the fabrication of so called ‘lumpy’ polymer micro-rods containing micro-particle inclusions. Particles are suspended in the polymer solution prior to injection into the viscous continuous phase under shear to produce ‘lumpy’ micro-rods. RHS: air bubble with adsorbed microrods with yeast cell inclusions. 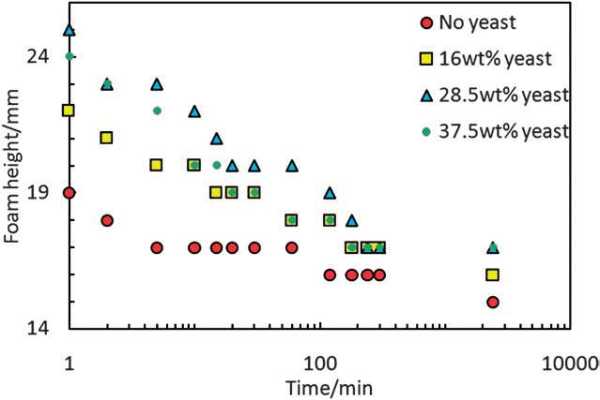 We developed a simple and novel way to fabricate multifunctional micro-ampules, which can have a dual functionality in products: 1) for product structuring, for example, the creation and stabilisation of foams or emulsions upon storage and 2) for encapsulation and controlled release of liquid ingredients like edible oils upon consumption [3]. Such novel types of micro-ampules can find applications in the food, cosmetic and pharmaceutical industries. Shellac and ethyl cellulose have been used as encapsulation polymer materials for various edible oils, like sunflower, cod liver or fish oil and other hydrophobic additives. As illustrated in Figure 5, the morphology of the produced micro-ampules depends on the type of wall material used (wax vs polymer), its initial concentration and the kinetics of solvent attrition. It also depends on the amount and type of oil, which in turn influences the rate of formation (nucleation), coalescence of the oil pockets and oil wetting of the non-solidified ampule wall material. In addition, the micro-ampule morphology could be influenced by the addition of oil- (or water-) soluble emulsifiers and, last but not least, by the continuous-phase viscosity and shear, which determines the overall ampule shape (Fig. 5). Ongoing work by us is aimed at clarifying the role of these parameters and to relate the ampule morphology with their foam-stabilisation capacity and encapsulation efficiency, storage stability and release. By using other encapsulation materials, such as enteric polymeric materials, pH-sensitive micro-ampules could be made. Creation of composite capsules using two or more compatible wall materials can be used for additional fine-tuning of the capsule stabilisation and delivery and release properties. 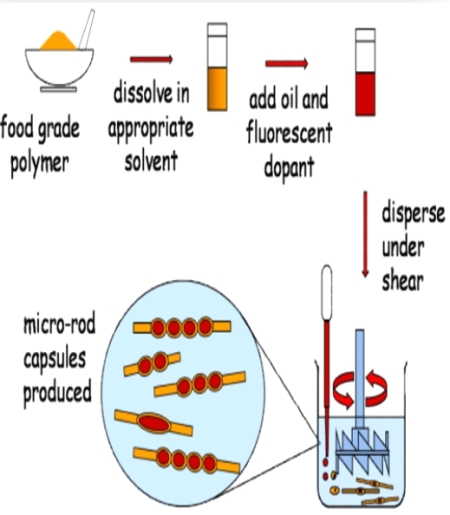 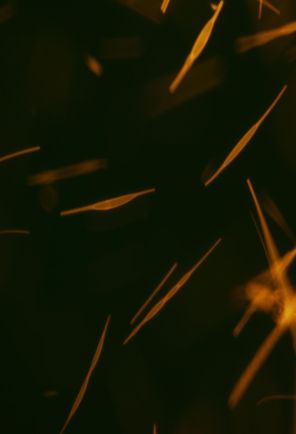 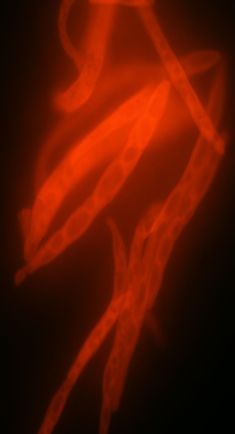