We demonstrated for the first time how living cells can be encapsulated inside sporopollenin microcapsules derived from Lycopodium clavatum[1]. Sporopollenin is a major part of the exine of spores and pollens. It can be found in soils and rock sediments and has been recognised as one of the most extraordinary resistant materials of bioorganic origin[1]. Sporopollenin can be isolated from the pollens by consecutive acidic and basic solvent treatment, which removes the inner cellulose wall but morphologically preserves the exine. Recently, we reported a simple and robust method for loading sporopollenin exine of Lycopodium clavatum with functional inorganic and organic nanoparticles synthesized in situ [2]. This technique uses sporopollenin microcapsules as micro-reactors where a chemical reaction generates a low soluble product inside, which precipitates in the form of nanoparticles usually much larger than the pores of the sporopollenin membrane [2]. To encapsulate large objects like cells, the sporopollenin particles are compressed into a pellet which forces their trilite scars to open up. The method involves exposing a sporopollenin pellet to an aqueous suspension of cells in the presence of a surface active agent which facilitates the capillary suction of the cells suspension inside the compressed sporopollenin and its ‘‘re-inflating’’ and closure of trilite scars (see Fig.2). We demonstrate that the viability of the cells is preserved after the encapsulation in the sporopollenin capsules which contain a significant amount of entrapped cells and show biological activity when placed into a culture medium. Since the sporopollenin nanopores allow nutrient transport across the capsule wall, it could be used for controlling the rate of in situ fermentation reactions or as bio-reactors. We also show that sporopollenin can be loaded with magnetic nanoparticles and live cultures simultaneously which would allow remote manipulation, fixation, removal or potentially targeted delivery of such bio-microreactors. The encapsulation of living cells inside sporopollenin can be used for many different purposes in the food and pharmaceutical industries, including protection of probiotics in foods and delivery of live vaccines for pharmaceutical applications. 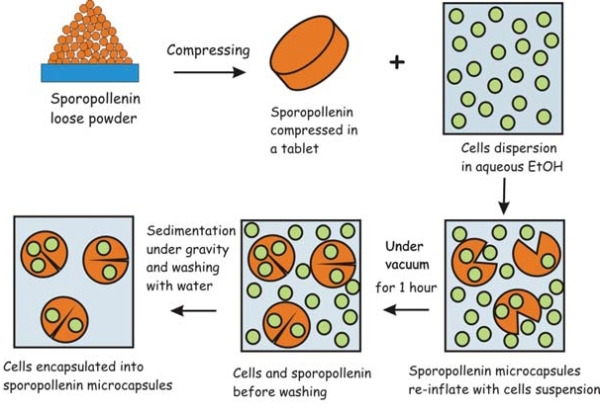