The generation of molecular hydrogen in living systems is widespread and is aided by a diverse group of enzymes collectively known as hydrogenase. Green microalgae generate hydrogen photosynthetically by splitting water and simultaneously producing oxygen. There are many disadvantages of this process, which is usually based on green microalgae suspended in a batch- or tube-based bioreactor, including scale up challenges, large space requirements and high maintenance costs. The light conversion efficiency of microalgae to hydrogen in commercial installations can be as low as 0.24%, hence the requirement to increase the light conversion efficiency for efficient hydrogen evolution.

In this project, we developed a new photobioreactor design, based on immobilized green microalgae cultures on a fabric-hydrogel composite (Fig. 1). This allows for a high density of algae cells with optimized light access and exposure to culture media. A fluidic system below the fabric provides the algae with minerals, nutrients and water required for the generation of hydrogen, which is collected through another vascular system above the fabric (Fig. 2). In essence, we form a cellular biocomposite which mimics the function and stability of natural leaves for efficient photo-production of hydrogen [1].

Fig. 1 Schematic of the concept design of the artificial leaf device showing the vascular networks for nutrient delivery to the cells and hydrogen extraction from the C. reinhardtii-fabric composite.

Fig. 2 LHS: Microscope images of cells immobilized in a polyester fabric using 5% (w/v) sodium alginate hydrogel. (a) Optical microscopy image of a part of the microalgae biocomposite on the synthetic fabric; (b) fluorescence microscopy image showing the viability of the microalgae cells; (c) optical microscope image of a single pore in the synthetic fabric showing the hydrogel immobilised C. reinhardtii cells in the void and (d) a fluorescence microscopy image showing the viability of the cells in the composite embedded in a single pore of the fabric. The cells were treated with FDA after their immobilization in the fabric for the determination of its viability.
RHS: The volume of the produced H2 gas (in mL) as a function of the incubation time per gram of suspended and immobilized C. reinhardtii cells in a 1 litre batch photobioreactor (dashed line and solid line) and the artificial leaf device (dotted line) in anaerobic condition suspended in TAP–P–S media in a system pre-flushed with argon. The three
systems were illuminated with the same light source and media conditions.

We have pioneered the fabrication of living soft matter made as a result of the symbiotic relationship of two unicellular microorganisms (Ref.1). The material is composed of bacterial cellulose produced in-situ by acetobacter (Acetobacter aceti) in the presence of photosynthetic microalgae (Chlamydomonas reinhardtii) which integrates in a symbiotic consortium and gets embedded in the produced cellulose composite (Scheme1). The same concept of growing living materials can be applied to other symbiotic microorganism pairs similar to the combination of algae and fungi in lichens which is widespread in Nature. We demonstrate the in-situ growth and immobilization of the C. reinhardtii cells in the bacterial cellulose matrix produced by the acetobacter simultaneous growth. The effect of the growth media composition on the produced living materials were investigated. The microstructure and morphology of the produced living biomaterials were dependent on the shape of the growth culture container, media stirring conditions which control the access to oxygen (Fig.1). As the photosynthetic C. reinhardtii cells remain viable and produce oxygen as they spontaneously integrate into the matrix of the bacterial cellulose generated by the acetobacter, such living materials have the potential for various applications in bio-hydrogen generation from the immobilised microalgae. The proposed approach for building living soft matter can provide new ways of immobilising other commercially important microorganisms in a bacterial cellulose matrix as a result of symbiosis with acetobacter without the use of synthetic binding agents and in turn increase their producing efficiency.

Tissue engineering requires large amounts of cell spheroids [1]. Tissue spheroids have been actively used as 3D tumour models, tissue reconstruction and organ bioprinting. Spheroids of adherent cells can be formed using different processes for cell clustering where they adhere to each other rather than to a substrate. The current processes of cell spheroid production involve spinner culture, NASA rotary culture and non-adhesive surfaces, the hanging-drop culture and 3D culturing in microwells. Although many techniques for tissue spheroids preparation have been reported, none of them are currently able to rapidly produce significant amounts of spheroids. Here we describe a simple and generic technique [2] for high throughput generation of tissue spheroids based on encapsulation of dispersed adherent cells in a water-in-water Pickering emulsion stabilized by protein particles.

Fig. 1. Schematic of the preparation of tissue spheroids by encapsulation of adherent cells in a dextran-PEO water-in-water emulsion template stabilized by protein particles [2].

The emulsion is formed from a cell suspension in an aqueous solution of dextran (DEX), which is dispersed in an aqueous solution of polyethylene oxide (PEO) containing protein particles. The cells are trapped in the DEX drops of a stable DEX/PEO emulsion which they prefer compared with the continuous PEO phase. Further addition of more concentrated PEO phase leads to osmotically driven shrinking of the DEX drops and compresses the adherent cells into tissue spheroids which are isolated by breaking the emulsion by dilution with a culture media (Fig.1).

Fig. 2. Optical microscopic image of (a) HEK 293 cells encapsulated in the DEX droplets in PEO continuous phase stabilized using protein particles (made from whey protein isolate) and (b) HEK 293 spheroids isolated from the emulsion formulation after increasing the concentration of the PEO continuous phase to 8% (W/V)  [2].

We demonstrate the method by using HEK293 fibroblasts and show that the cells preserve their viability in the spheroid generation process (Fig. 2). This work will give researchers cheap and scalable technique for rapid preparation of similarly sized spheroids of adherent cells for bio-inks for 3D organ bioprinting applications and potentially for tumour models.

We demonstrate that stimulus responsive capillary suspension can be formed from hydrophobized calcium carbonate particles suspended in a non-polar phase (silicone oil) and bridged by very small amounts of a hydrogel as secondary aqueous phase. Inclusion of thermally responsive polymers into the aqueous phase yielded a capillary structured suspension whose rheology is controlled by a change in temperature and can increase its complex modulus by several orders of magnitude due to gelation of the capillary bridges between the solid particles (see Ref. 1). Doping the secondary (aqueous) phase with methylcellulose (MC), which gels at elevated temperatures, gave capillary structured materials whose viscosity and structural strength increase by several orders of magnitude as the temperature is increased past the gelling temperature of the MC solution (Fig. 1). Increasing the MC concentration from 0 to 2% w/w in the secondary (aqueous) phase increases the complex modulus and the yield stress of the capillary suspension of 10% w/w hydrophobized calcium carbonate in silicone oil by two orders of magnitude at fixed temperature. By using an aqueous solution of low melting point agarose as a secondary phase, which melts as the temperature is raised, we produced capillary suspensions whose viscosity can decrease by several orders of magnitude as the temperature is increased past the melting temperature of the agarose solution (Fig. 1). The development of thermally responsive capillary structured suspensions can find potential applications in structuring of smart home and personal care products as well as in temperature-triggered change in rheology and release of flavors in foods and actives in pharmaceutical formulations. 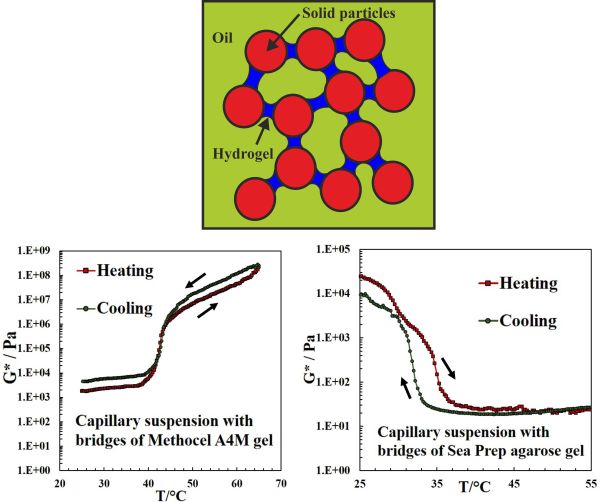 Fig. 1. (TOP) Schematic of a silicone oil-based capillary suspension of 10 wt% calcium carbonate particles with 1 %(w/v) secondary liquid phase of aqueous bridges doped with 2% of hydrogel-forming agent. If methyl cellulose is used as gelling agent (LHS graph), the complex modulus G* increases with temperature as the MC gels. If agarose is used as a gelling agent (RHS graph) in the aqueous bridges, G* decreases with increasing the temperature as the agarose bridges melt. Thus, the rheology of the capillary suspension is controlled by an ulrta-low overall concentration of a gelling agent in the bridges and follows the gelling/melting behavior of the hydrogel.